Do you really need a physical office anymore? 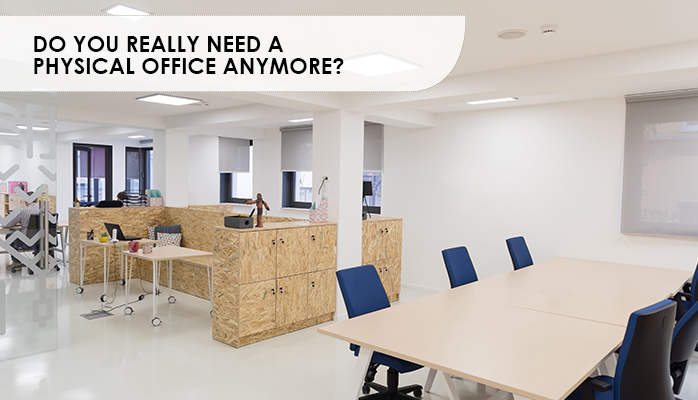 In today’s world, many organizations are shifting their core business online.  Employees spend increasing time in front of their computer, begging the question – is an office space all that important anymore?

My company originally began as a side project.  I went to my 9-5 job, came home and worked for my clients at night.  Last year, I quit my job and started my own company (woohoo!).  I was pregnant at the time, so this may have been a bit of a hormonal decision, but in the end it paid off.  I did most of my work online, however decided to invest in an office space because I thought this was what I was supposed to do.

And guess what?  Despite having the worlds best landlord: here comes the rent, the hydro bill, the parking, the Internet bill, the insurance… and it took me an hour each way (I opted for centrally located rather than close).  Once I had my baby, I realized that taking her to the office was not in her best interest, nor was it productive for me.  So, I started working from home instead and realized I was far happier.

After doing my year-end, I realized that most of my expenses had to do with having this physical space.  I barely used it and my employees also preferred to work from home.

A lot of company’s today, both big and small have offices because this is what has always been done.  However, with advances in technology and a population that is increasingly technology savvy, I believe we need to question our assumptions about whether office spaces are actually needed.  This is obvious in some lines of work (like mine), but I believe it stands true in some more traditional professions as well.  Don’t get me wrong, I’m not saying that doctors shouldn’t have an office anymore, however do we really need to go to their office for everything?  If I just want a referral, why can’t I just Skype in?  What if I just had a few questions for my accountant?  Do I really need to drive an hour for a 5-minute meeting at his office?

I choose to use my office space as a central ground to meet clients, however I believe the world is changing so quickly that in 5 years time this will no longer be the case.  As the world becomes more globalized and more of our business shifts online, the need for a physical office may disappear.   I feel this is a step in the right direction although will it possibly lead to a new world of agoraphobics?