Our CEO makes the news! 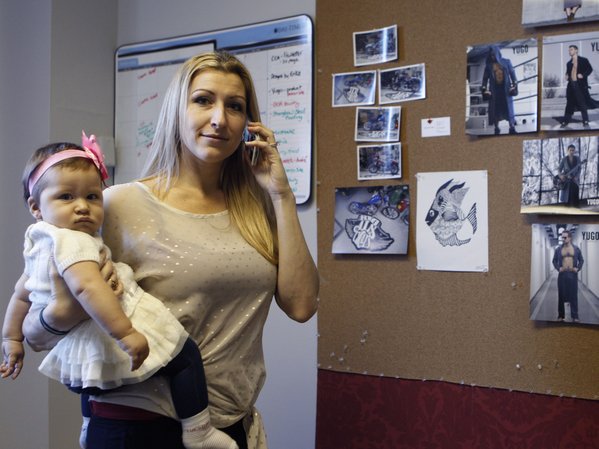 Feeding’s over, and Sadie grants her company colleagues permission to return to work — as long as she’s kept amused. Otherwise, no siesta, and all bets are off for the eight-month-old “HR manager” of Mirror Marketing.

“My daughter’s loud, demands constant attention and tells everyone what to do — just like her mother,” says company founder, Miranda Flaig. “She’s already exhausted three babysitters, so it made good sense while I was breastfeeding to bring her to the office.”

Flaig finds that Sadie’s presence at work creates a family atmosphere that unites her team and appeals to the company’s clients. The millennial mother’s unorthodox approach to management has paid off in less than a year for her design, marketing and PR startup.

Last February, at seven months pregnant, Flaig decided it was time for a change, and quit her well-paying marketing job to start her own company.

“It might have been the hormones,” she says. “But I believed I had the skills and contacts. A friend told me about an available office in an old Mile End building that houses design studios, workshops and high-tech startups. The place has a great vibe, so I signed the lease knowing I had to make it work.”

With a creative team of six (including Sadie), Mirror Marketing sees itself as a one-stop-shop that has taken on everything from website management and wine label design to political campaign publicity, lesson plans for primary schools, union newsletters, and brochures for security systems.

“We offer everything a startup or established company needs to build its brand and online presence,” says Flaig.

The company found its first new client within minutes of opening.

“A neighbour saw me moving in and asked what we did,” she says. “He needed a web designer and some flyers and offered me work. Satisfied with the job, he referred me to other clients and that’s how I’ve been building up the business.”

“It’s been very encouraging as I believe referral is the greatest compliment you can offer a business.”

But it goes beyond referrals. Flaig is also quick to seize an opportunity, and that has resulted in one of her more unusual clients: a California-based motorbike company that customizes Harley-Davidsons so that daredevils can do wheel stands on their quarter-tonne machines.

“I think you have to be in it to appreciate it,” says Flaig. “My husband’s a Harley rider and complained to the company he had trouble ordering parts from their website. ‘My web designer never returns my calls’ was the plaintive response, so Nigel recommended me.”

“I followed up and fixed their website that weekend. Impressed by such full-throttle service, they’ve used me for design work ever since.”

Being unresponsive to the public is unfortunately all too common in the online world, Flaig says, as some web designers display what she tactfully describes as “an artist’s attitude toward business.”

Instead, she says her model is “always answer the phone, reply to emails and never leave people hanging.” Another of Flaig’s mottoes comes from leadership guru Simon Sinek: Customers will never love your company until the employees love it first.

“I try to make the office a happy place where we have fun,” Flaig says. “We order lots of pizza and have chocolate on hand.”

The office is also equipped with a large corkboard that showcases team ideas and achievements.

“I try to make employees feel valued and allow them creative freedom to go for it.

“I don’t micromanage, but send out a weekly list of what needs to get done. I don’t care if you play Angry Birds in the office so long as you deliver what’s needed.”

Flaig extended her sense of fun to a recent photo shoot that involved a range of men’s bathrobes she’s designing and promoting for a fashion house.

“Instead of using an agency to book the male models, we went on a Facebook and Instagram hunt for a hot-looking hipster, businessman, athlete and musician — plus a playboy-looking gentleman (for the older customers),” she says.

“I left messages asking if they’d like to pose in a bathrobe. Surprisingly, they all agreed. That’s one advantage of being a woman. I don’t think it would have worked the other way around, but just considered creepy. You have to use your strengths.”

Another of Flaig’s strengths is a knowledge of food, which she has used for a supplier of specialized mustard products to Montreal’s top restaurants. In addition to designing promotional tools, like flyers, she attracts return visitors to the client’s social media page by posting her own recipes that include mustard.

“I work longer hours than ever before,” says Flaig. “But looking back, I was miserable for 10 years. I believe now that if you wake up dreading the day ahead, you’re wasting your life. I used to hit the snooze button for two hours before waking up. Now I rise before the alarm, excited every morning and can’t wait to get to the office.”

That said, Flaig admits she took a big risk starting her business and could have done some things better.

“I started with just enough capital to cover only one month of expenses. Even though it worked out, I don’t recommend it. Many startups fail in the first year and you need a bigger cushion.”

“I should have also saved more on unnecessary purchases. I bought a sports Audi and a $5,000 Mac before I started Mirror Marketing. I didn’t really need either, and realize it would have been better to invest that money in the business.”

As an occasional guest speaker, Flaig is similarly frank about life as an entrepreneur, but she’s also inspirational. A recent presentation at McGill University ended with PR students clamouring with offers to intern at her company and one even offered to babysit Sadie.

“Perhaps it’s all a family thing,” says Flaig. “I helped my mother with her Internet company when I was 12, so I guess Sadie’s from three generations of crazy ladies.”